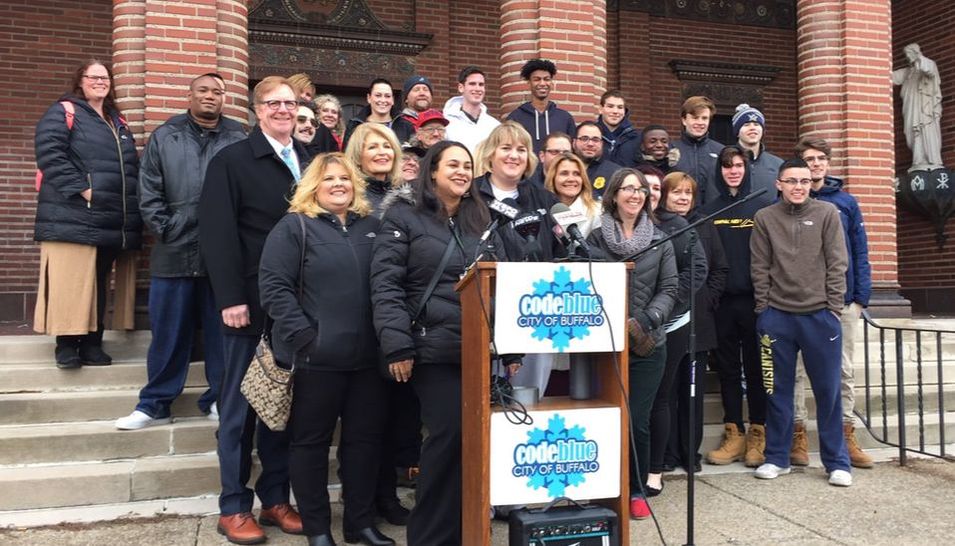 You can support Code Blue & Code Blue 32 by donating to the WNY Coalition for the Homeless or Restoration Society."Code Blue" is the City of Buffalo’s emergency weather safety plan that provides outreach, transportation, shelter and a warm meal to Buffalo's homeless population on evenings when temperatures and wind chill fall to 15 degrees or below from November 15 to March 15. This year's Code Blue Shelters are located at: Harbor House at 241 Genesee Street and St. Luke's Mission of Mercy at 325 Walden Avenue.

“Code Blue 32” is an expansion of our Code Blue initiative that will be called on nights when temperatures or wind chill are between 16 to 32 degrees and will include Shelter and Day Time Warming Center services at our Harbor House (St. Luke’s will be closed these nights).
​
Last year Code Blue served almost 600 individuals and has reduced the weather related death rate among Buffalo’s homeless population to zero for the past 2 years, a significant decrease since its inception in 2009. Code Blue is funded by the City of Buffalo, Erie County, National Fuel and Rich Products and is also supported by a collaboration of agencies under the WNYCFTH. It is open to anyone living on the streets and/or needing shelter during extremely low temperatures. ALL ARE WELCOME.

If you see or know of someone who needs shelter during cold weather, call 211.

You can support Code Blue & Code Blue 32 by donating to the WNY Coalition for the Homeless or Restoration Society.

When the low drops below 15 degrees, it's a general Code Blue and two sites open: